I chose to study abroad because I believe that studying abroad is an invaluable opportunity. My research professor, Dr. Anthony Arduengo, offered to take me abroad during the Fall 2014 semester, for the Spring 2015 semester. I did not have any other decisions other than to commit to the trip and figure out the details later.

To prepare to go abroad I began notifying everyone that I was involved with. This included Alabama Crew, Student Housing, Bama Dining, and of course my roommates. With finals and classes up until two weeks before I left, I really did not have time to prepare mentally besides telling my roommates that I was going to miss them. There were jokes about how fattening the food was and in what shape I would return. They predicted a more round shape.

I began to get quite excited as the deadline approached, while being quite nervous about the language barrier. Before setting foot in Germany, I had not received any formal German education. I was going to a country where I was illiterate! Obviously this made me nervous, but I knew that I could learn it.

One of the things I was really looking forward to was becoming fluent in another language, and traveling throughout Europe. Fluency in three months is quite difficult, but I thought I could make it happen. I also hoped to learn about the culture and the people of Germany. As far as I knew at the time, German people only ate bread and beer. Spoiler: I was embarrassingly wrong.

Traveling wise, I would planed on at least going to Paris, Frace, Chur, Switzerland, and Tirano, Italy.

As the days before my departure grew smaller, I made sure to see my friends and family as much as I could. The night before my flight, I made sure all of my bags were packed and ready to go. I was scheduled to leave on New Years Eve, at 6 am. This naturally got in the way of bringing in the New Year with my friends, but I did it anyways. I got a whole eighty minutes of sleep, and was off to the airport! I made it through security and to my gate in a record 35 minutes. I was on my way to Deutschland! 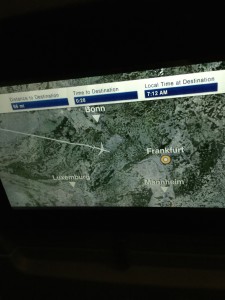 I took this as the Pilot told the passengers that we were about 15 minutes out. Every flight attendant spoke German, English, French, and I think either Swedish or Dutch.

I landed in Frankfurt International Airport on January 2nd, and was glad to see that the signs were bilingual. My professors however, were bilingual as well, and had already started the German lessons. This was my first time in the European Mainland, and so far I was liking it. The language barrier was soon present as I arrived in Mainz, where I would be spending my time abroad.

The weekend after New Year’s is a country wide holiday, so I could not move into my dorm/apartment right away. I stayed with Tristan, the other student I was abroad with, and slept on a mattress we acquired from the Housing Department.

The first picture that I took abroad, was a sunrise over the southern part of the city. I hoped that everyday in Germany would be like this, but knew that Germany was no Tuscaloosa. 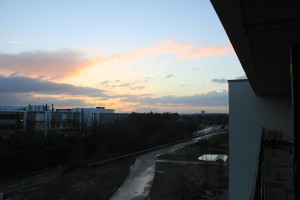 My favorite thing about Germany was the food, the bread, and public transportation. I never had to drive the entire three months I was there. I could grab groceries on the way back to my apartment, and not have to make a separate trip. The other great thing was everything was so close. I could be in 3 different countries, all within 4 hours. 4 hours to Paris, 4 hours to the Netherlands, and if I wanted to fly, 4 hours to Cairo. I made it to Chur, Salzburg, Tirano, and Wiesbaden, but my courses did not leave much room for traveling as I would have liked. 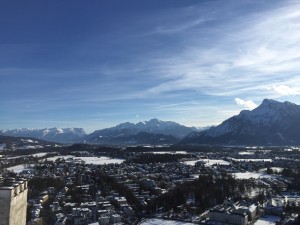 Salzburg, Austria, The Alps  viewed from the Hohensalzburg Castle

Taking classes while abroad was a very different experience than traditional classes. It was only one other student, and myself with our professor. A typical day was about 7-8 hours in the lab or studying, followed by 1-3 hours in class. Then I would go home and do homework or workout and then do it all again the next day. This may seem like a lot of work, however Germany is actually one of the countries that works the least. I’m not kidding. 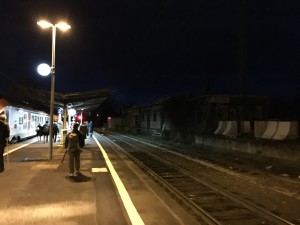 Taking a train somewhere between Austria and Germany.

The average annual hours worked per person in Germany is 1,330 hours, which is only 25.6 hours per week. A 25 hour work week, now wouldn’t THAT be amazing. These kinds of weeks are inevitable when all of the stores except for groceries close at 7pm. If you want to go shopping for shoes on a Tuesday, you had better take some time off of work to do that.

Germans are very efficient, and their time off is spent in the same way. The locals that I met enjoyed rock climbing, paint balling, bowling, espresso bars, and of course, pubs. The pub and bar scene in Germany is quite different than the States. Sometimes the locals would go drinking on a weekday night, and if you only work about 30 hours a week that’s not a big deal!

Going out on excursions in the city did take some time to get used to. The most difficult thing was everything in Germany was written in German. And that makes sense because their national language, after all, is German. However, most people know English. That does NOT mean that they will speak English. A few people that I met in the city, usually clerks or cashiers, would understand what I was saying in English, but respond or refuse to speak English. I found this difficult at first because I did not know any German before I arrived in Germany, however I made it a goal to not rely on English.

As I was purchasing souvenirs for my roommates back home, I had an entire 10 minute conversation in German about Cuban Cigars at the Cigar store. The clerk was telling me that you could buy them and take them back, but she wasn’t sure if it was completely legal or not. I asked about the new regulations that Obama passed in January, allowing no more than $400 in Cuban goods brought to America, but she hadn’t heard of it. 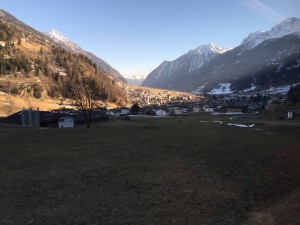 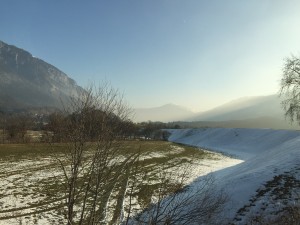 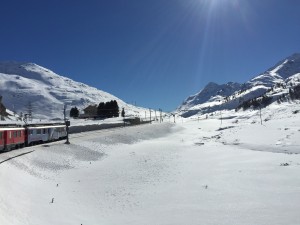 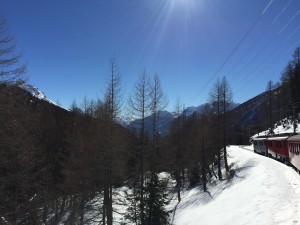 Pictures of the Alps on the train between Tirano, Italy and Chur, Switzerland.

After I left the store I realized that I was just in a store, in another country, speaking a non-native language to a native about a product that I wished to buy. In three brief months I had learned enough German to understand and converse with a native. To say I was impressed was an understatement.

As I prepared to leave, I was a little frustrated. I had finally just mastered enough of the language to understand the culture and the people that spoke it. I had no problems speaking to locals, and I could go anywhere that I wanted and understand enough to enjoy myself.

It was nice to be going home, but I was torn. I had made friends in Germany that I would surely miss as I went back to the States. I also wasn’t looking forward to the separation from the rich, tough German bread. I was excited to go home and see my family, my dogs, my girlfriend, and my friends back in Tuscaloosa and at home.

I packed up my room, bought my neighbors coffee in exchange for the use of a vacuum, packed up and then was off to the airport.

"Please remove your Computer from your bag.", Originally published 06/03/15
By Matthew Studer 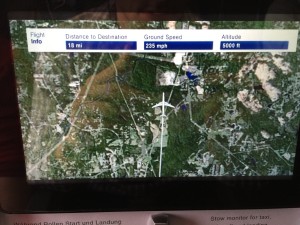 Arriving back in America was a great feeling. Knowing that I could communicate effortlessly with everyone was very comforting. I did iss some of the German food and culture, and of course the friends that I made abroad.

My study abroad experience has taught me to simply be more calm. If I can go to another country and survive pretty much on my own, then I can get throug  h whatever it is that I have on my plate. That kind of diversity and adversity training that I received abroad is very applicable to most things back home.

My closest friends have noticed changes in my work style, and I have too. I don’t ever want to work 9-5 in a cubicle at a computer for the rest of my life. My perspective on the 8 hour work day has also changed because of my time abroad. Most people who work 9-5  aren’t in fact working the whole time. There’s Facebook and shopping and anything else you can do on the internet to distract you from your work. I would much rather work hard for 5-6 hours and then go home and go outside, or enjoy my hobbies. 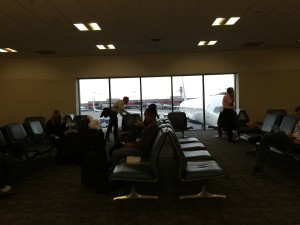 Traveling across America after I returned back from Germany really made me realize how lucky Germany is to have large public transportation. Trains in America aren’t very practical, but the subway systems and transportation in most American cities leave something to be desired (Dc Metro). Germany is fantastic for transportation, but probably for the wrong reasons. The second world war caused Germany to expand their transportation systems for the movement of troops throughout the country as efficiently as possible. This caused high speed and high capacity rail systems to be created as well as the Autobahn. Since America has thankfully never had a war at home, the need for those types of transportation possibilities doesn’t exist. We do however have the Eisenhower Interstate System across the U.S., but the most efficient way to travel in America is either by car or by plane.

I was fortunate to not have very serious reverse culture shock, but some glaring differences were the cost of living and the health of the people.

Germany is a country with pretty socialist ideals (universal healthcare, etc.), but the cost of living there is just dirt cheap. I rented a student apartment IN the city for only about $400 a month. Compare that with housing in Tuscaloosa that is easily $500 a month around campus, and Tuscaloosa isn’t even that large of a city. Basic groceries are also not expensive.

The people in Germany are required to walk more often because most people take public transportation and don’t drive as much. In America, a car is required to survive, so in daily life, Americans could walk maybe a mile, while Germans could walk between 2 and 3 in a day. Germans however would probably smoke all of those 2-3 miles, so maybe they aren’t that much healthier.

My advice for future students is to make sure you know the language before you go, go with a large group of students, and make sure to explore more! You can learn much more exploring countries than you can in a classroom. Oh and don’t forget to have fun! 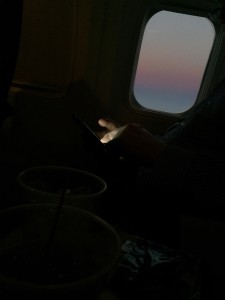 (The title is because I left my computer at security in Germany. I got it back a month later.) 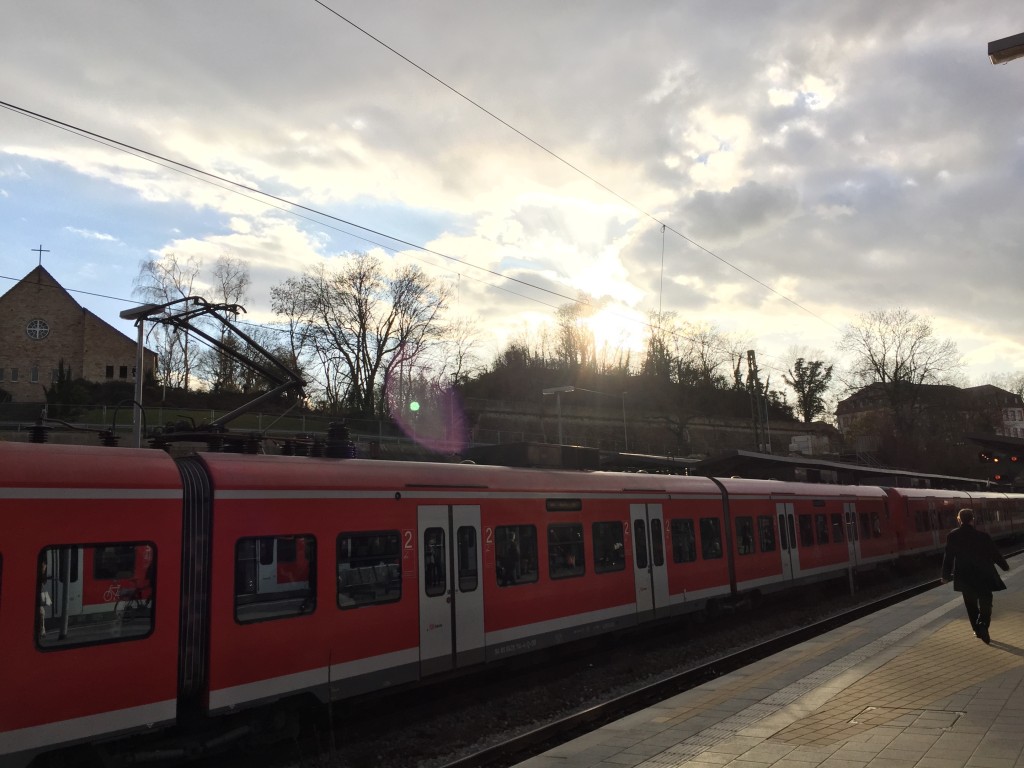 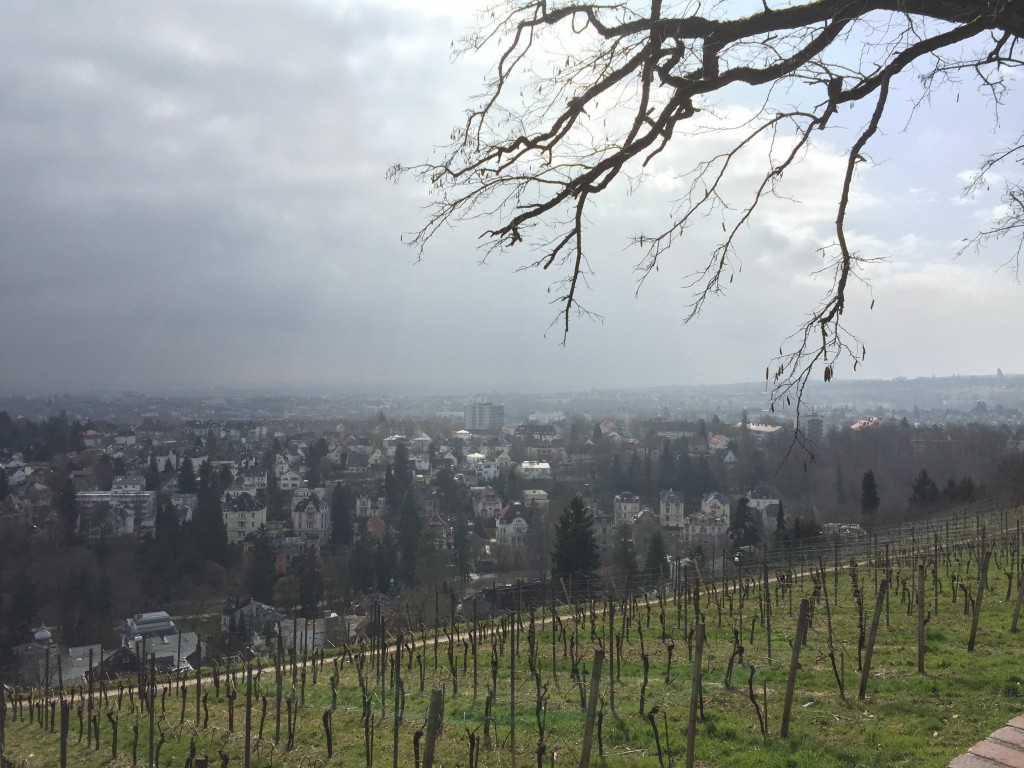 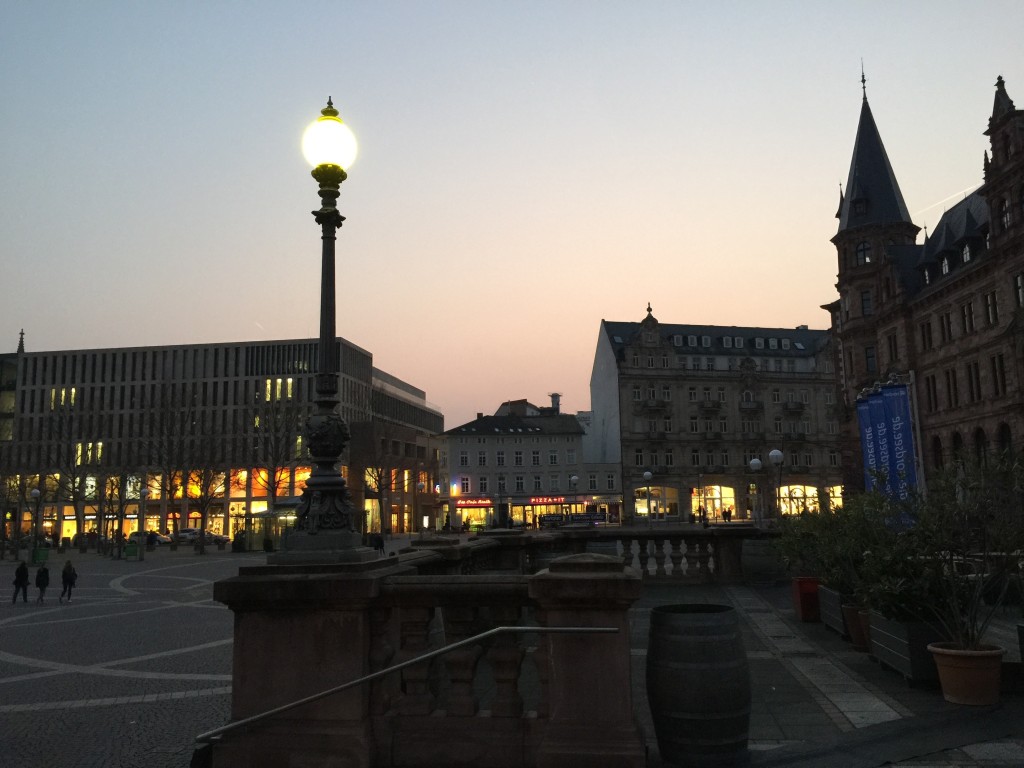 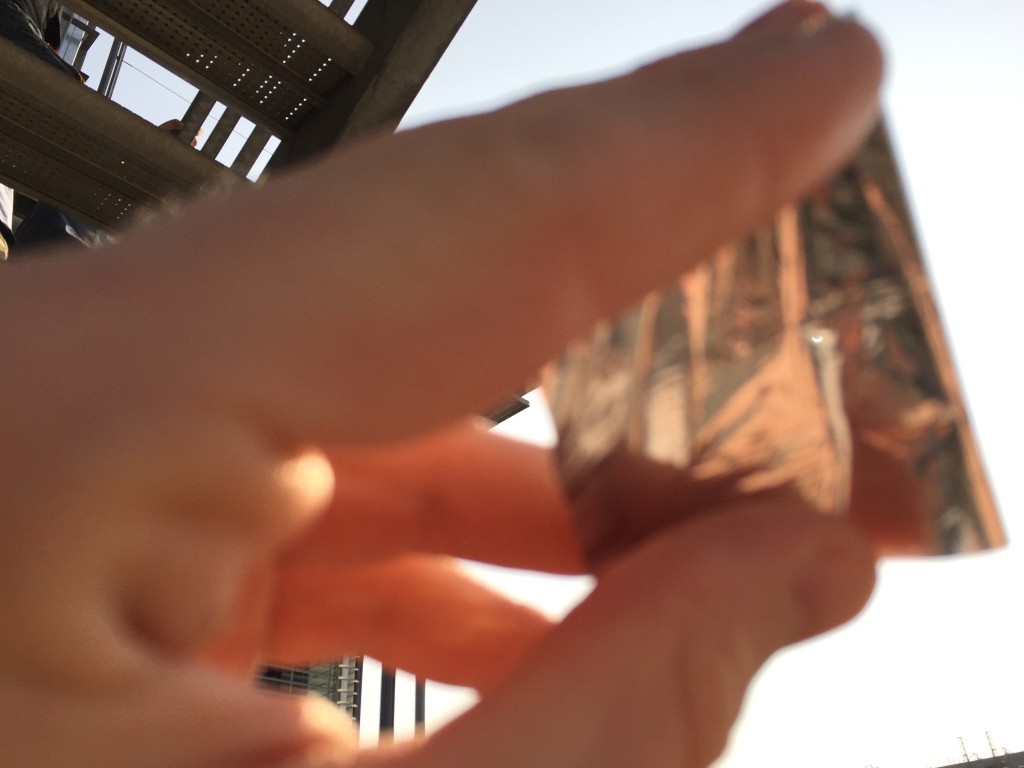 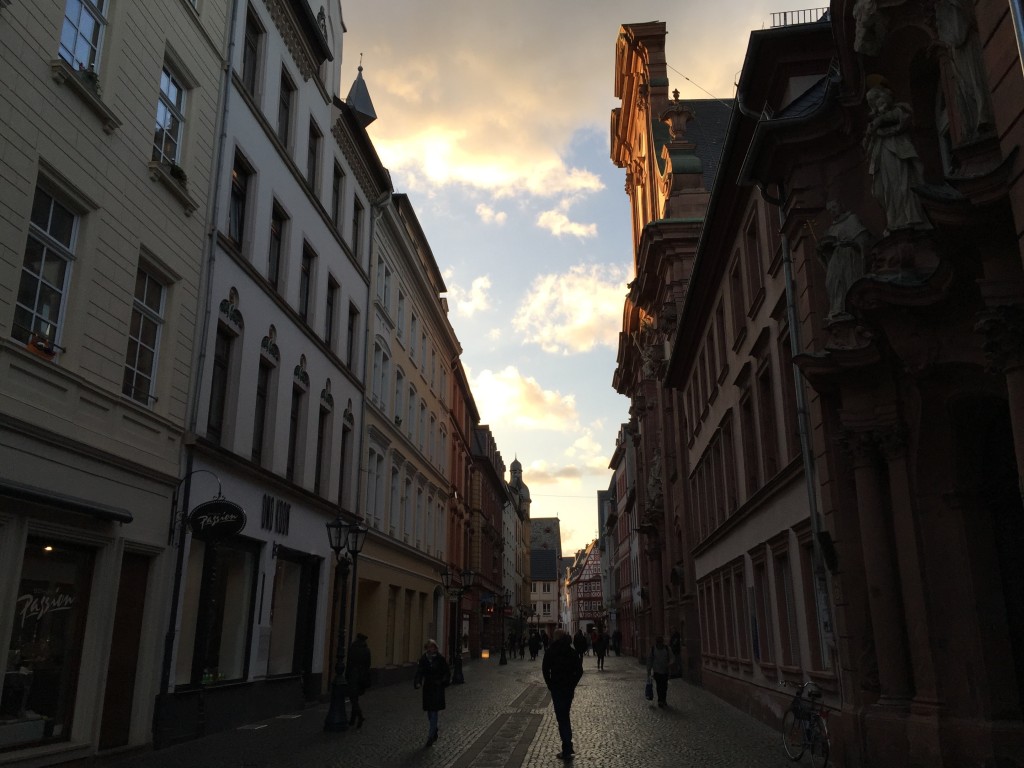